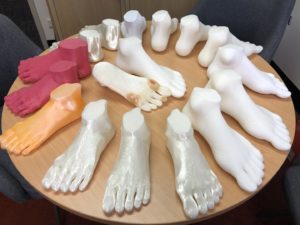 From the University of South Australia media release:

It’s gory, sticky and undoubtedly on the nose, but a blend of icing sugar, chicken stock and flexible resin is proving to be the just the right recipe for creating realistic foot ulcers as part of a world-first podiatric training initiative at the University of South Australia.

Concocted by UniSA’s Dr Helen Banwell and Dr Ryan Causby the gooey mixture is being added to newly printed 3-dimensional feet and is designed to mimic infected and non-infected diabetic foot wounds.

The 3D printed feet are created with wound-like cavities in place. Made from thermoplastic polyurethane (a plastic with many properties, including elasticity, transparency, and resistance to oil, grease and abrasion), each takes a week to print, and costs less than $4 to produce. The addition of life-like ulcers and effects is added by the creative hands of UniSA’s podiatry team and can encompass anything from dry gangrene to oozing pus.

“Managing and adeptly treating severe foot conditions is an essential podiatric skill, particularly given the consistent rise in type 2 diabetes within our population,” Dr Banwell says.

“Foot care is incredibly important for people with diabetes, as even one small cut can potentially lead to catastrophic consequences, including foot ulcers, lower limb wounds or amputations.”

Diabetic foot disease is one of the leading causes of disability across the world with a mortality rate worse than many cancers. Diabetic Foot Australia estimates that on any given day 300,000 people are at risk of developing diabetic foot disease.

In Australia, diabetes causes more than 4400 amputations, and 10,000 hospital admissions for diabetes-related foot ulcers, many of which end with a limb or part of a limb amputated.

“Over the past two decades we’ve seen a 30 per cent increase in lower limbs amputation rates,” Dr Banwell says.

“About 85 per cent of these are preceded by a foot ulcer and could be prevented with appropriate care.

“The most effective way to manage these conditions is to medically remove dead or damaged skin to expose the healthy skin underneath and encourage healing. But learning the necessary scalpel skills to do this is challenging due to the risks of ‘practicing’ on a such a high-risk population.

“The 3D foot models – and the mock injuries with which we enhance them- enable us to provide a realistic but safe learning tool for students to practice their scalpel skills, before they begin clinical placements, and all without the stress or anxiety of treating a real patient.”

To support the training, ulcer debridement and management videos are being developed in partnership with the via the NADC accredited high-risk foot clinic at the Royal Adelaide Hospital.

“New technologies are opening doors every day,” Dr Banwell says. “Our 3D injury-enhanced foot models are a meeting of creative minds and new technologies, and we’re very pleased with the result.

“When the students encounter the models, we know they’ll be pleasantly (or perhaps unpleasantly) surprised. Either way, we’re sure they’ll be gaining the confidence, techniques and critical skills that will place them steps ahead of the competition.”

The new training with 3D foot models officially kicks off on Monday 1 April (no joke).

Why podiatrists have seen a surge in foot injuries during lockdown

Could COVID Toes Be An Emerging Acro-Ischemia Symptom Of The COVID-19 Virus?